As someone who is primarily a painter, some aspects of photography can be quite frustrating. In March of 2010, I had an idea for a photo shoot: take a bunch of multi-coloured LEDs, throw them around a snow covered forest, and take a bunch of pictures. The coloured light should bounce off the snow and create some interesting effects. This sounded like a cool idea.

The only problem was that I had this idea in March, after the winter snow had melted. I had to wait for winter to come again before I could try out this idea. When I’m painting, the time of year doesn’t matter so much. Winter scenes in summer, summer scenes in winter; if I can imagine it, I can paint it. This isn’t the case with photography. Photography is all about patience. I had to wait for nature to play along before I could try out this idea.

Two nights ago, I finally had my chance to head out on this photo shoot.

Brad had recently picked up a new camera, so I thought this could be a good opportunity for a ‘Brad vs. Kyle’ thing, introducing some friendly competition into the shoot.

Despite having 10 months to get ready for it, I still managed to ended up having to solder the LED circuits the afternoon before the shoot. I had forgotten my tripod at home, but while I was soldering, Brad was machining new parts to make his old old tripod functional.

One simple photography trick is to shoot from an unusual point of view. People are used to seeing the world at medium distance from eye-level. Change it up, and shots instantly become more interesting. Shallow depth of field, macro, low, ‘worms-eye’ shots, and high ‘bird’s-eye’ shots all add an easy something to an image. Brad made some platforms to attach to ladders, giving us an easy way of getting shots from a new and unusual perspective.

We drive out to a forest location that Brad knows very well. We grab some ladders, and awkwardly carry our gear out to the middle of a forest. I attach batteries to each of the light circuits while Brad sets up the ladders. 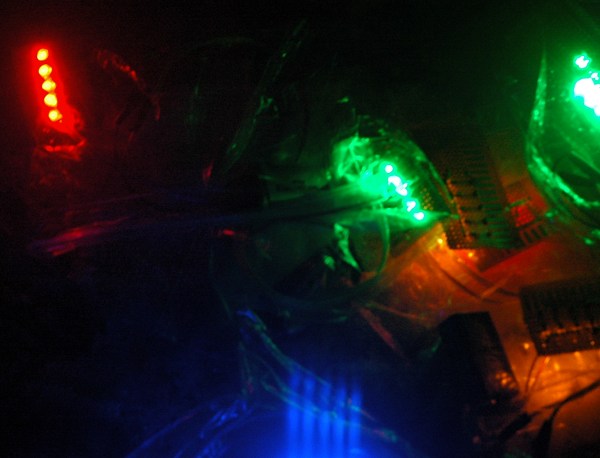 The weather couldn’t have been better. The temperature was hovering around zero for the first part of the evening, so we were quite comfortable. I was able to shoot for nearly two hours before my fingers became too numb to operate my camera. The sky was overcast, and the crescent moon behind the haze filled the sky with a faint orange glow.

Unfortunately, nothing ever goes perfectly. The low light made manual focus impossible and we forgot to bring our laser range finders. The D70 has terrible auto-focus in low light, and Brad’s shiny new D7000 didn’t fare any better. There simply wasn’t enough light to see anything. Eventually, we figured out a walk around: we would shine a flash light on an area and have the auto-focus in our cameras lock on to that. Then we would switch our cameras into manual-focus mode, and shoot away. It was frustrating, but it worked. The tripod I was using wasn’t locking properly, if I had my camera on an angle, the body would slowly rotate, making half my shots useless. Oh well. I still ha a great time, and I still got a few shots I’m happy with.

The colours in this image have not been modified in any way. this is what it looks like straight out of the camera. The only post-production effects on this image are some cropping and resizing. 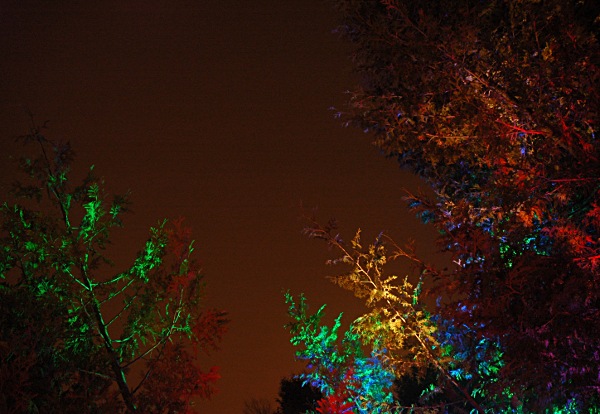 Tweet As someone who is primarily a painter, some aspects of photography can be quite frustrating. In March of 2010, I had an idea for a photo shoot: take a...

15 thoughts on “Painting with Light”