It’s easy to be discouraged by failure. It’s easy to do your best to avoid failure. But failure is a necessary part of learning. If you aren’t teetering on the verge of failure, you aren’t pushing yourself far enough.

When I sign up to do an art show, it’s often done a year in advance, I send in images of my older work, and when I’m accepted, I’m locked in, I have to produce a certain amount of new work that is similar to the examples that got me into the show. And when you sign yourself up for as many shows as I did last year, it’s a challenge to produce enough work for each of these shows. I had nine shows last year, many of them overlapped, meaning I had two full bodies of work on display simultaneously. I’m not a factory. I can’t just pump out X number of units each month. I like to give each piece the time and attention it deserves. Sometimes that only takes a few days, and sometimes it takes several months.

Because I’ve been working on these pieces for these shows, I haven’t had a chance to branch out and try any radically new techniques, materials, or processes. I’ve been fighting to keep up with deadlines. Playing around with something that is very likely to fail when I have a show coming up is risky. So over these past two years, I’ve been playing it safe.

I don’t mean that I’ve been lazy, but I have been cautious. I’ve been refining my practice, not redefining it. I’ve been focusing on all the little details, rather than revolutionizing my artist output. This detail-oriented approach has done wonders for the technical aspects of my work, like my paint handling, but I haven’t been pushing myself far enough. I haven’t teetered on the edge of failure.

I’ve reached the point where I just have to look at my sketch, and I know instantly whether it will be a successful painting or not. I’ve come up with a sketch that I like. I’ve deleted the compositions that don’t work. Before I even pick up a paintbrush, I know what the end result will look like.

This is too comfortable for my liking.

When I realized that I was about 8 paintings ahead for my December show, and had nothing scheduled for the next few months, I realized that I finally had my opportunity to try something new. I would challenge myself, give myself an image with all the worst traits, all the hardest things, and a few uncertainties, and see what happens when it is translated from a sketch and into a painting.

I don’t now how to explain it in words, but when I am designing these sketches, I know what I’m after. I know what is visually interesting, I know what will work as a painting. Most importantly, I know what to avoid. I can’t explain exactly what it is that I’m after when I’m composing these images, but I can tell in an instant if an image has it, or not.

I knew right away that this image did not work 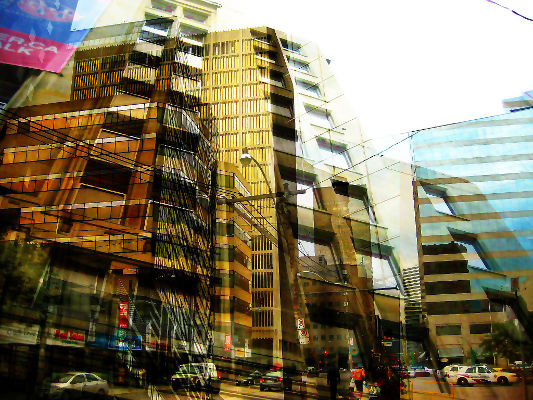 I am completely uninterested by most of this image. It has some highly patterned geometric areas to challenge my skill and patience, and really boring colour harmonies happening in the parts of the palette that I prefer to avoid.
In short, the image in this sketch sucks.

The challenge was simple: Surprize myself.
Take a sketch that sucks, and make a good painting out of it.
I couldn’t use my normal approach, that would lead to a far too literal translation. I reached into my back pocket of painting techniques, and pulled out a few that I haven’t really used since art school. Glazing, stain, dry brush, scumble, the whole shebang; I used it all along with the usual impasto and squeezing. I built the forms slowly, out of complex layers of subtle variations of colour, each one applied through a different technique.

The effect this causes can be dazzling when used in the right place: what appears to be a simple, solid form at a distance breaks apart into a complex texture upon closer inspection, giving the painting a lot more life and visual interest. A brush stroke on top of another brush stroke is boring. The magic starts to happen when it becomes impossible to tell which stroke came first.

But, it wasn’t working in this case. I kept applying layer after layer, trying to find a way to make it work, but, eventually, I decided to cut my losses and move on. Long story short, all this work ended up being a much slower path to the same place my regular technique takes me, and I ended up with a painting I’m not particularly proud of: 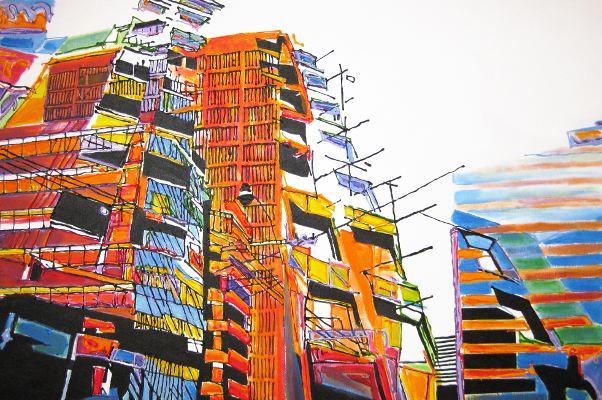 I failed, and that’s a good thing! That was the point of the whole experiment I had run in my studio! I tried something new, I changed it up; I learned some things about my process. I learned a few new tricks. I have a better image in my head of what to look for in a sketch, I have a cleared picture of what to avoid. I wasted some time, and I wasted a lot of paint, but I gained some new insight into my practice, and that will stay with me when I start my next piece.