END_OF_DOCUMENT_TOKEN_TO_BE_REPLACED

I just realized I never posted part 3 of my D600 sensor dust test to my blog:

Part 3 of this video is another timelapse sequence combining 1000 photographs using the camera’s built-in intervalometer. The shots in this series range from #2681 to #3680, so I’ve broken that magic 3000 shots threshold that seems to be where things start to clear up for the D600.

In the comments to my previous videos, a number of people mentioned that the problem is oil/lubricant spatter, not dust (which explains why the spots will not blow away). And that this is a problem with new cameras, one that will go away after taking several thousand shots. So I figured, why not do a third sequence of 1000 shots and post the results?

Same setup as the first video:
I set up a time lapse sequence of 1000 shots with my 50mm 1.8D lens on my D600 body
I did not change lenses throughout this video.

I did use a hand pump blower to blast away any loose dust that had build up, and that did eliminate several spots, but the vast majority of them remain stuck to the sensor, and a DIY wet cleaning would void the warranty, which I am not prepared to do on a piece of equipment that is only one week old.

As you can see, while there is much less dust and oil landing on the sensor this time around, there are still a few new spots appearing. These look more like dust than oil spots.
I can deal with dust with a blower, it’s a minor annoyance, not a deal-breaker.

The camera was dropped off in person at a Nikon service centre on November 27th, and I am waiting for a call from them to let me know it’s time to pick it up. Then I will be able to see if the dust and oil problem has really worked itself out, if they have removed the excess lubrication, or if they’ve just spent two weeks doing a wet clean on my sensor.

Tweet I just realized I never posted part 3 of my D600 sensor dust test to my blog: Part 3 of this video is another timelapse sequence combining 1000 photographs...

Wow! What an incredible response to my first video. I wasn’t expecting any of this. Thank you to all for your comments and ideas.

As I was browsing the blogs who had picked up this story, and reading the viewer feedback, I was given several ideas that were too good to pass up. One was to try another set of 1000 shots, only this time, have the camera pointing downwards, so dust or oil will have a more difficult time reaching the sensor. So that’s just what I did!

Tweet Wow! What an incredible response to my first video. I wasn’t expecting any of this. Thank you to all for your comments and ideas. As I was browsing the...

Sorry for the slow pace of things here lately. (It seems like I’ve been saying trhat a lot here lately…)

I’ve made some changes to my lifestyle, and as a result, I have a lot less free time than I used to. On top of that, I’ve had a lot of really big, exciting stuff come up, and I’ve been doing a lot more freelance work than usual. (Thats right, I paint, and I shoot photos and videos, I have lots of creative outlets, because every time I practice one, I get better at the others. Seems like I’ve been doing a lot of everything these days. Who knows, I just might record an album some day!

As a result of everything that has popped up, the blog suffers. I’m sorry, dear reader, but when it comes down to it, I’d rather be making cool stuff than writing about how I was wishing that I was making cool stuff.

The good news: I’m going to be doing some big things in the near future, so I’ll have some new experiences to write about!

One of the things I can tell you about now is that I’m spending a lot more time in public transit than I used to. Far too much time. For upwards of seven hours a week, I’m stuck on a bus. That’s a lot of wasted time. I don’t like wasting time. Fortunately for me, I’m travelling on off-peek hours, meaning I always get a seat. After a few weeks of this, I decided to bite the bullet, and spend money on something not directly art-related: a shiny new netbook.

Here’s a picture of the little guy. Ain’t she adorable? 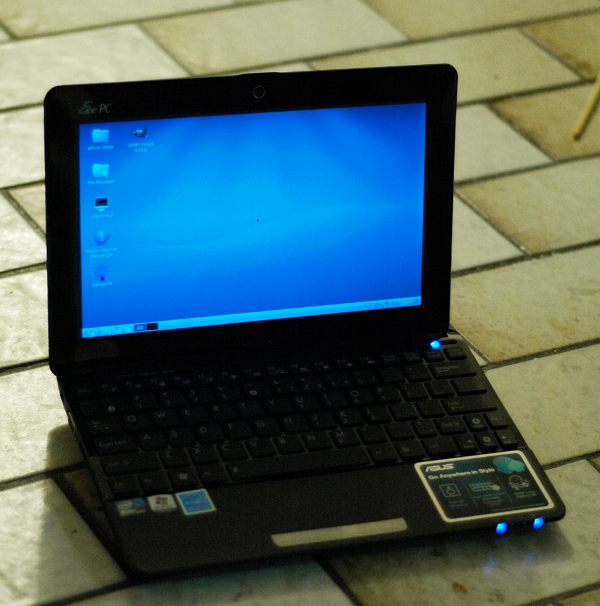 So, I’m currently stuck on a bus, typing away, and being ever so thankful to asus for still putting matte screens in their netbooks. If this were one of the far more common glossy-screened laptops, the glare from the sun would make writting in my current situation impossible. But here I am, typing away, making use of what would otherwise be wasted time.

Now, I’d better get back to work.

Tweet Sorry for the slow pace of things here lately. (It seems like I’ve been saying trhat a lot here lately…) I’ve made some changes to my lifestyle, and as...

It opens wide, all the way up to f/1.8, which is about 2 and a half stops better than any of my other lenses. The shallow depth of field this allows has given me a whole new world to explore.
END_OF_DOCUMENT_TOKEN_TO_BE_REPLACED

If you like overly broad assumptions, than these next few paragraphs are for you:
There are two types of photographers: those who like to take pictures, and those who obsess over gear.

Some head out early in the morning, venture to remote locations during stormy weather, and wait there, hoping to capture something breathtaking. The others stay at home, count pixels, take pictures of charts, zoom up close and look for flaws in the gear.
(I’m leaving out the third kind: people who downloaded some nifty app for the iphone that automatically filters their images into something cool.)

The photographers who go out and take great images can look down on the gear-porn junkies; they buy all this expensive gear, and never use it to make images worth looking at. The technically minded gear-porn junkies look down at the photographers for buying gear that is 2% less sharp around the edges at certain f-stops while zoomed in all the way, when a better alternative is only two pay-cheques more expensive. And everyone looks down on the iphone photographers, because no one seems to notice that good images are all that matters.

I’m not really a photographer, so I guess I’m safe from being stuck in one of these groups I’ve just invented, but I can certainly understand the appeal of being obsessed with gear. Its objective. It’s easy. Taking a good image is hard. Powerful images have a certain quality that can’t be quantified. In the discussion over what makes an image worth looking at, aesthetics are lost in translation.
END_OF_DOCUMENT_TOKEN_TO_BE_REPLACED

Tweet If you like overly broad assumptions, than these next few paragraphs are for you: There are two types of photographers: those who like to take pictures, and those who...