I’ve got a few artworks in an end-of-the year show at Navillus Gallery!
Here is the show info:
Navillus Gallery is pleased to present SMALL WORKS, an exhibition of smaller-scale, affordable works of art for the holiday season.

Small Works will feature the work of an eclectic group of Canadian artists, including:

Small Works opening reception will be held during the Holiday Art Market on 29 November from 12pm – 5pm. 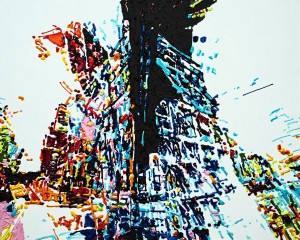 The last website was built by hand in a plain text editor.  I had no idea what I was doing, and changing one thing meant opening and editing at least 4 separate files.  This was a whole lot of very monotonous work, and the urge to procrastinate nearly always overpowered the urge to update.

This new site is using a lot of ready made components with lots of advanced content management systems; I’m halfway through uploading all the content and I’m still discovering new features that aren’t even advertised by the theme’s creator, Devin Price.

There is now a master gallery listing of images.  Images can be tagged in various ways, and galleries can be created on the fly based on whatever tag you select.  That means if I tag things “abstract, 2009, acrylic, Toronto,”, you can click “2009” and see a gallery of everything I painted in 2009.  With just one more click, you can be taken from there to a new gallery depicting toronto, or all my strictly abstract work.

I think this is a great addition to the website, because it frees people from the rigid organizational scheme I used on the old site, and lets you search for things however you want to search for them.

As I play around with this website further, I’m sure I will discover more cool new features that have so far gone unnoticed by me.  Content from 2006 to 2010 is currently uploaded and tagged, but I still have to go through and update all the information and the availability of each piece.  That won’t be a fun job…

You may have noticed that things look a little different around here.  That’s right, I’ve got a new website.

My old website was built to be fast and efficient, but it wasn’t flexible or easy to maintain.  With the introduction of tablets, smartphones, smart TVs, and web-enabled gaming consoles, flexibility has become, in my opinion, much more of a priority.  And based on the frequency of my updates, making it easier for me to do so is probably going to be a welcome change on my end.

Moore Gallery, which had me on their stable of artists, has transitioned from a gallery with a physical space into focusing on private dealing.  That means that I’m a free agent in the Toronto art scene again!  As much as the internet changes things, democratizes the art world, and bypasses the gatekeepers and tastemakers of the past, I’m still the kind of artist who wants to show physical objects in a white cube.  I like galleries, and I’m working on settling into a new home for the foreseeable future. 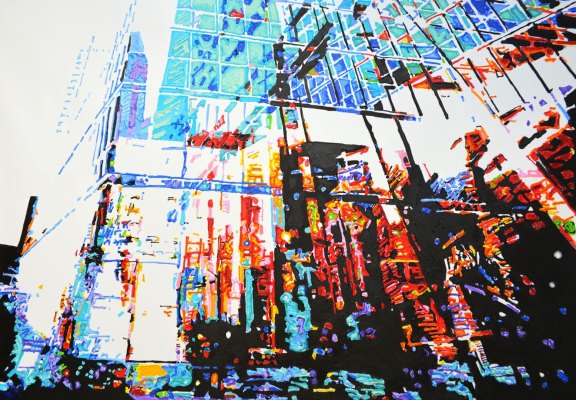 Concrete and Glass, an exhibition of new paintings by Kyle Clements will be on display at Moore Gallery in Toronto from March 9 to March 30, 2013.

The opening reception will be held on Saturday, March 9th, from 2 to 4pm.

I put so much effort into pulling this show together and advertising it on social media, I forgot to announce it on the official website! Hopefully everybody who checks this page also checks the facebook and twitter pages.

I currently have one piece on display at Moore Gallery in Toronto from January 8th 2013 to February 2nd, 2013 for their annual winter group show.

There will be no official opening reception for this show, but feel free to drop by anytime, as there is a lot of great work from a lot of great artists. I only planned on spending five minutes in the gallery, dropping off my piece then heading out, but I stuck around for nearly an hour to take it all in.

I’m really excited to announce that I will be having my second show at Moore Gallery this March. I am being pared with Sakis this time around, and although I haven’t seen any of his newer work, if it’s anything like his older encaustic paintings from 7 years ago, I think our two shows will be quite complimentary towards each other.

After the successful opening of my debut show, City Lights, at Moore Gallery in Toronto, I was invited to show work at the 13th Street Winery in St. Catherines, Ontario. Although this show shares the same title as my last show at Moore, and much of the same work was on display, I wanted this show to be more eclectic. I lifted my self-imposed rule of only selecting work based on photos from time lapse sequences, and selected paintings that I thought worked well together visually with the work from the last show.

The only camera I had with me during this opening was the one in my cellphone, so the image quality isn’t up to par. But grainy blurry greenish shots are better than nothing! 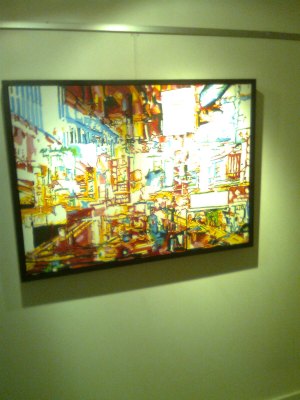 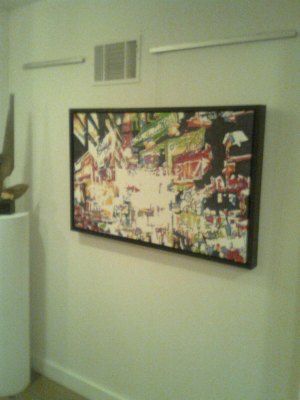 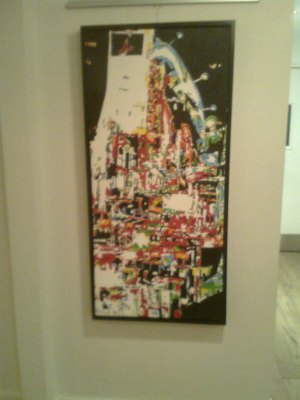 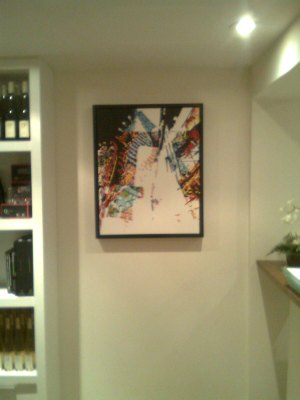 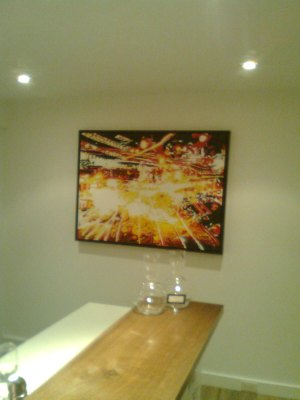 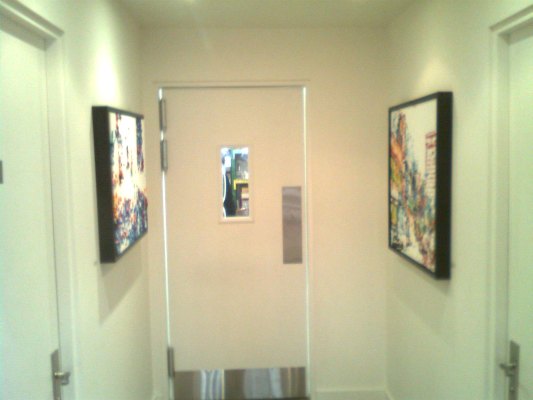 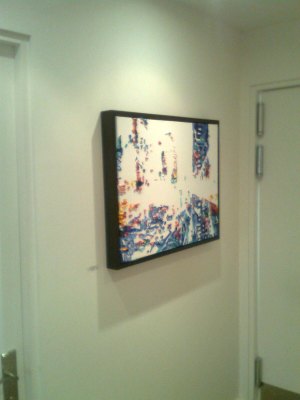 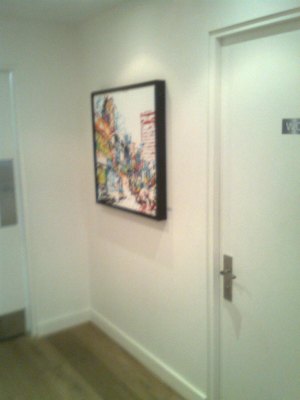 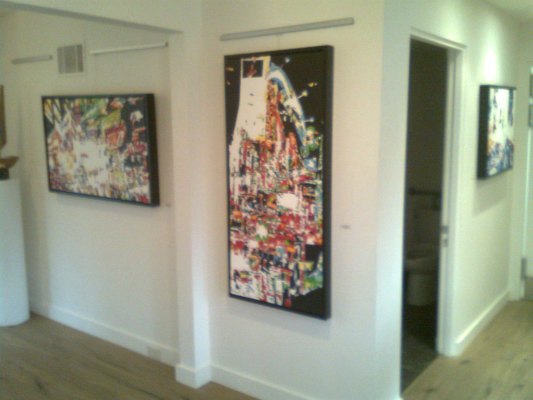 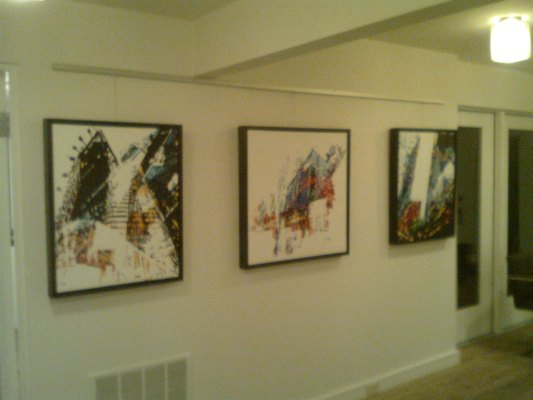 These three paintings were intended to be sneak peek at where I was going for my next show, “Concrete and Glass”. But they were the first to sell, and I ended up having to do a lot more work to fill the gallery for my next gallery show. 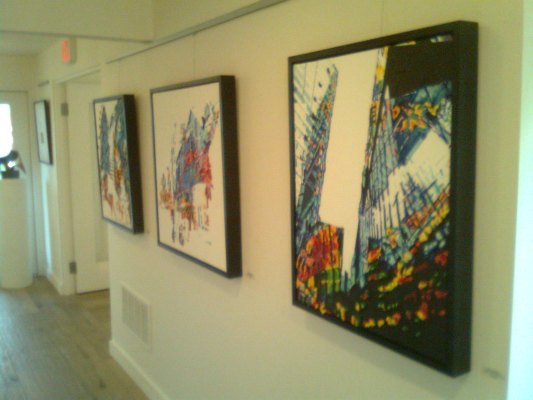 Another angle of the set of three paintings that were the precursor to “Concrete and Glass”.

This show was the first time that I’ve had enough of an established body of work that I wasn’t rushing around at the last minute, fighting to crank out enough work to display. For this show, I was able to pick a theme, set out my entire body of work, stand back, and pick out a number of pieces that fit that theme. In this case, visual abundance was the focus – the density of images we come across in our daily lives from advertisements and videos to photos on social media, was something I was thinking about.

I selected paintings that were based on collages of images taken from time-lapse photography sequences, where I was literally choosing one or two images from thousands of possibilities and combining them into digital collages emphasizing speed, abundance, and visual density. 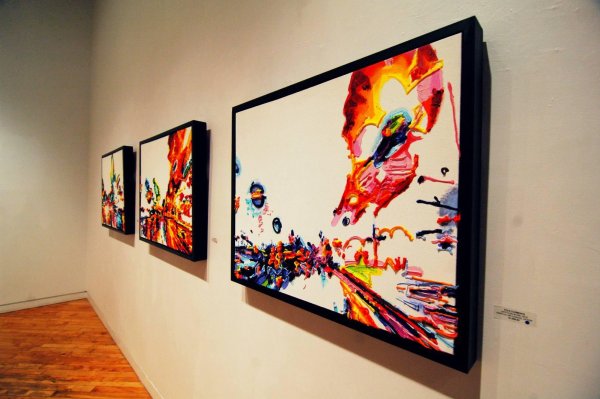 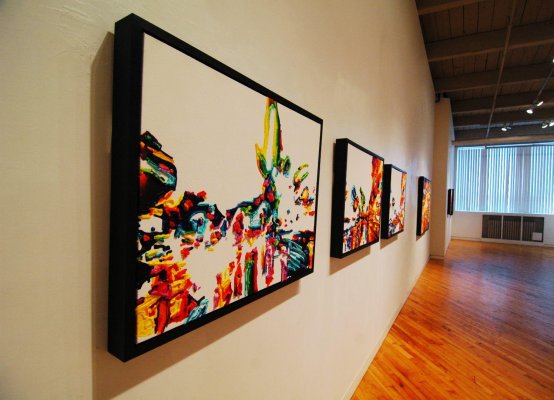 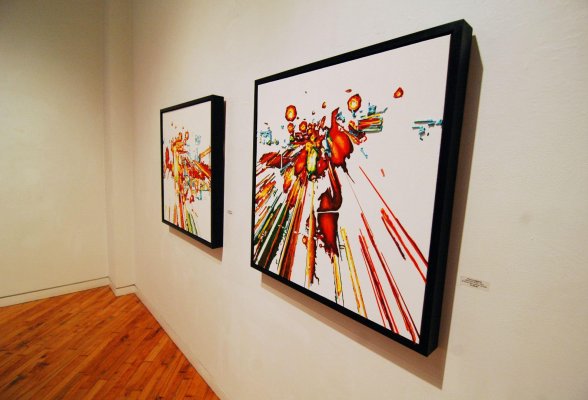 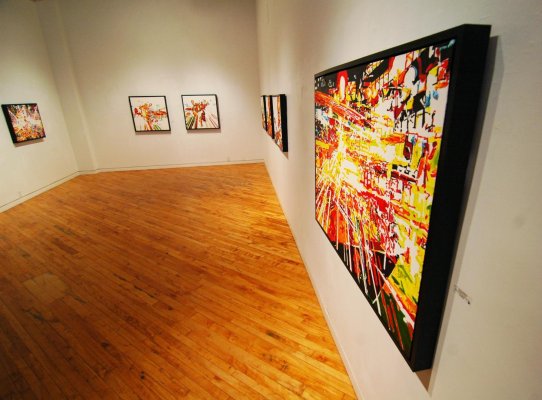 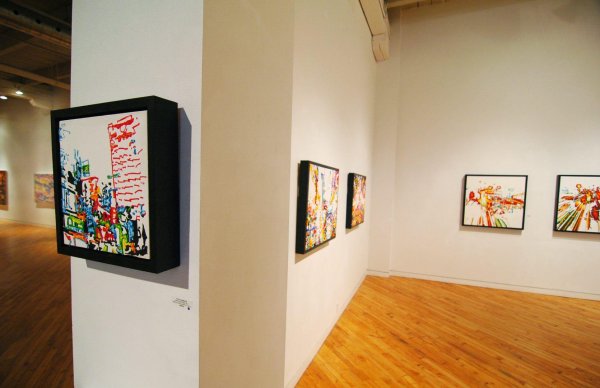 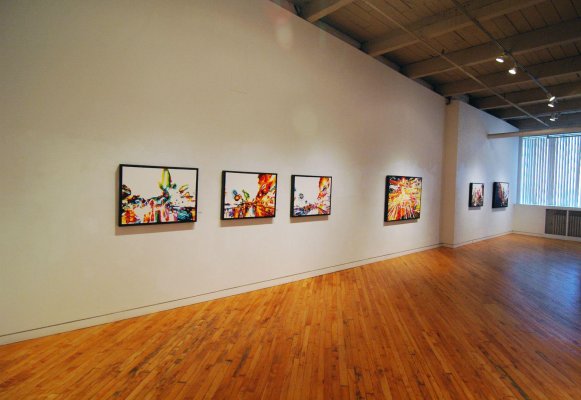 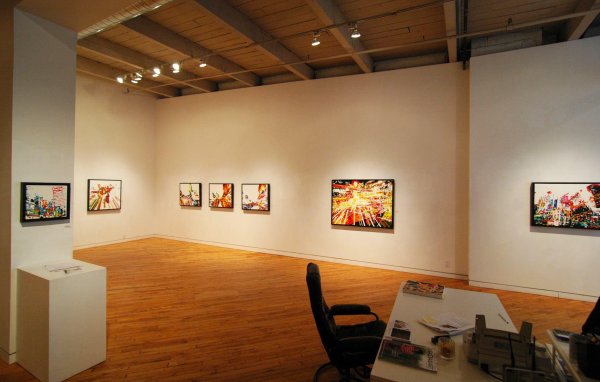 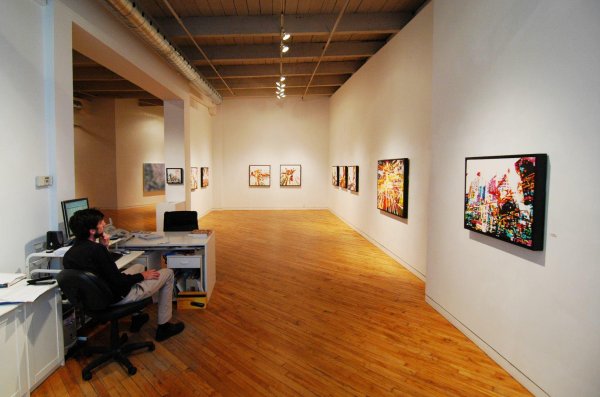 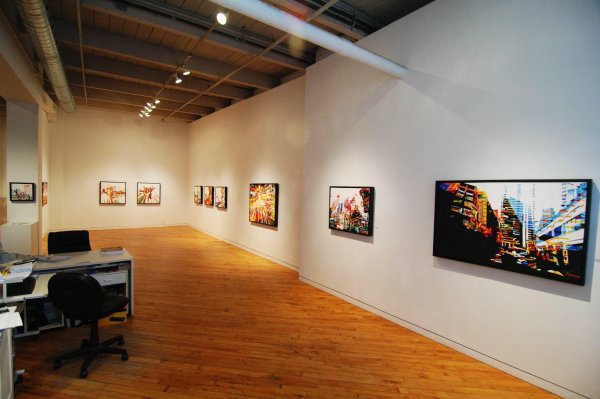 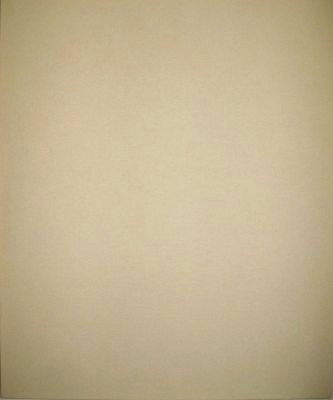 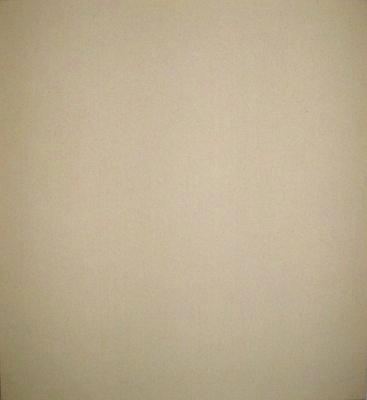 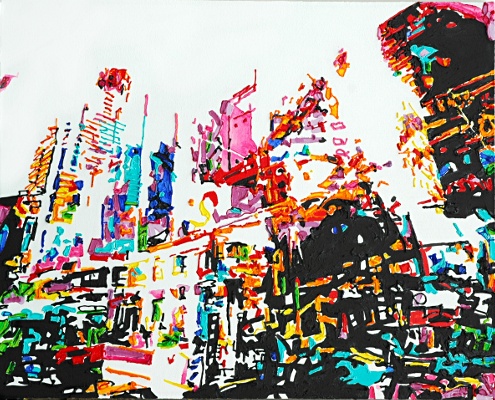