I’m not sure when it happened, but the Toronto International Art Fair (TIAF) has been renamed “Art Toronto”. So instead of writing “I’m at TIAF”, people will now be typing “I’m at AT”
“At AT?”
Yes.
“You’re at AT?”
Yes.

The confusion will really set in when Star Wars nerds start having these conversations.
“At AT? AT-AT?, You’re a gigantic robot walking the surface of Hoth in search of rebel troops?”

The first time I went I was completely blown away by the amount of art. I had never attended an art fair anywhere near that scale, and the experience was quite overwhelming, and mentally exhausting.

This was a high school school trip, so I was under strict time constraints, and had to make a certain number of notes and sketches. (Which I still have with me today) Since this experience occurred before going to University, I was still unaware of the great divide between art that gets written about by academics, and art that someone would actually want to purchase. I just saw it as art to look at, think about, and enjoy.

As time went on, and I saw more and more shows, I became more aware of the difference between blatantly commercial fine art, and the more non-commercial intellectual, academic-wet-dream art. I began checking out shows at artist run centres and non-profit art centres in the days before and after TIAF, so I could make easy comparisons between market-driven work, and the other stuff that artists are making outside of the commercial world. That doesn’t mean TIAF is blatantly commercial; this Art fair does not completely exclude some of the more conceptual work. Interesting installations line the edges of the fair.

‘Line the edges’ isn’t a lame attempt on my part to be poetic. I mean it quite literally. It seems like the more conceptually-oriented work was located closer to the edges of the convention hall. For example, General Idea had stuff outside of the main display area. Ironically, the concept behind their display seems to be blatant commercialism, so this whole paragraph should probably just be ignored.

I became less and less impressed with the shows as time went on. I began recognizing many of the same old galleries and many of the same old styles. Now that I’ve gotten more experience behind me, I can see what art is just filling in a genre, what is chasing a trend, and what truly has something interesting going on.

That’s not to say I don’t enjoy the shows. I wouldn’t go year after year if I wasn’t getting something out of the experience, I am just less impressed with most of what I see than I used to be. Now when I see a bunch of thick brown and grey rectangles on canvas, I move on. I’ve seen it before; I didn’t care then, and I care even less now. Yes, the colours in this season’s Sears catalogue are very popular, but that doesn’t mean it has to be your pallet for the next few months. Be more creative than that! grrr!

This probably deserves it’s own post at some point, but there are artists who focus on having a strong art practice, and artists that focus on having a strong art career. One type stands the test of time and only grows stronger, while the other pays the bills and is later forgotten entirely. That doesn’t mean artists can’t do both; making good art and paying the bills is the dream I’m chasing after. My frustration is from artists who are chasing the career at the expense of their practice. Those materials deserved to be put into better artworks, but they were wasted on yet another bland piece.

With the big name change, and the new colour-scheme and graphic design sense on the promotional material, (and an awesome cover by kick-ass Toronto artist Alex McLeod) I am expecting to some big changes within the show. I’m not sure what I mean by that, but with all the re-branding they’ve done, I am entering the show with the expectation that this one will be somehow different than last year’s show.

I walk into the show, and right away, I see the MOCCA (Museum of Contemporary Canadian Art) booth, which has an Edward Burtynsky print, and three prints by Alex McLeod.

Within 30 seconds of walking into the booth, Alex shows up. We chat for a bit. Alex is awesome, and super nice, so if you see him, you should say “hi”.

I ask him about the secret signed print give-away. He doesn’t know if there are any left. I walk up to the MOCCA info desk, and tell the man sitting on the other side the secret password. He hands me a print. I now own a signed Alex McLeod reproduction! 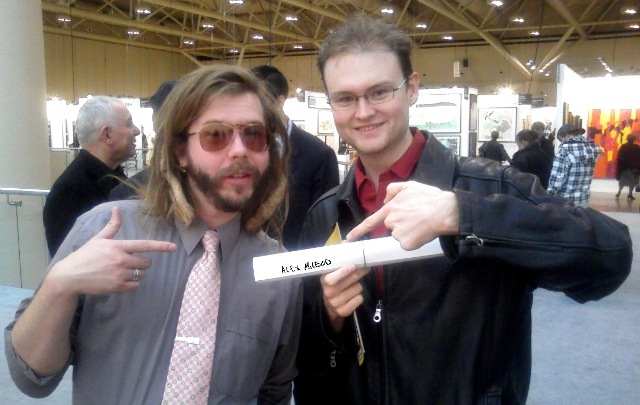 I spend the next three hours walking around and enjoying the show.

I might post a follow up that is more specific, but here are some very broad, general things I’ve noticed from this show (and past TIAF shows).

1. Montreal has some amazing things going on. Seriously, not one single disappointing piece came out of this city. I was far more impressed by the Montreal galleries than the New York ones. Scott Everingham, represented in this show by ‘galerietroispoints’ might be one of my new favourite painters. He may be a Toronto-based painter, but it was a Montreal gallery showing him.
2. The stereotype that “Germans make very nice things” was reinforced.
3. York University’s gallery continues to present work that my high school art teacher would never have accepted. The booth itself was very good, though.
4. Many galleries have stopped caring about photography at these festivals. (yay)
(EDIT: I mean galleries have stopped caring about people taking pictures of the art, not that they have stopped caring about fine art photography.)
5. The idea of local, regional styles in art is, for the most part, a false one.
5.1. The word local looks a lot like lolcat when I am completely exhausted, leading to some confusing moments during the final edit of this entry.

I will be going to this show again tomorrow. This time with a notepad, so I can remember some of what I’ve seen.

Tweet I’m not sure when it happened, but the Toronto International Art Fair (TIAF) has been renamed “Art Toronto”. So instead of writing “I’m at TIAF”, people will now be...