It opens wide, all the way up to f/1.8, which is about 2 and a half stops better than any of my other lenses. The shallow depth of field this allows has given me a whole new world to explore. 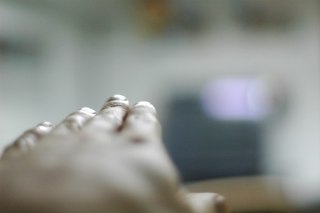 My old main lens, a Nikkor 18-70mm 3.5-4.5G was making me lazy. Why walk towards something? With a zoom, I can just move my wrist down 2mm and bam! I’ve zoomed right in. This is a recipe for bland. I needed a prime to force myself into actually moving my body into a better position.

This lens is absolutely perfect for what I bought my camera for: shooting images of my paintings.
50mm means no barrel distortion, and no pincushion distortion; straight lines are straight lines, not arcs.
At f/4 and f/5.6, everything is SUPER sharp. super insanely crisp. wow.

The lens is also good for the odd paying gig that comes my way. Most of my friend are musicians, so I most often end up shooting bands playing in dim environments. I normally had my lens zoomed in to 70mm, then took hundreds of shots, hoping that 1 or 2 would actually be in focus. This prime is right where I want it, but it has those 2 and a half extra stops, meaning motion blur wonâ€™t be a problem.

I also have some macro extension tubes that I never use, and now I can!Â  My existing lenses are all â€˜Gâ€™ Lenses, meaning there is no aperture ring. As soon as I take the lens off the camera body, it closes down to f/22. My new lens has an aperture ring! It feels soooooo good to control things for real, feeling the mechanics move under my fingers, rather than just turning a stupid dial and watching numbers on a menu screen change.

Now if you will excuse me, I must return to what has been keeping me busy these past few nights: running through my apartment, shooting bokehlicious pictures of things.

A painting of mine: 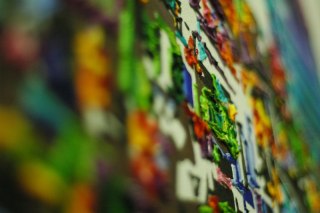