I’ve often heard the expression, “jack of all trades, master of none”. The idea behind this phrase is obvious enough: if I spend my time doing a little bit of everything, I may end up being versatile, but I will never, ever be truly great at any one thing. And if I want to be a great painter, I’d better drop the camera, the audio gear, the camping, the website work, the writing, the wood work, the electronics, and everything else, and just paint.

I’ve been told that if I make a business card, I should only put ‘painter’, and leave out the “photo, video, sound” part. If I make a website for my paintings, I should avoid even mentioning that I also do photography. If I really want to pursue photography, then I should make up a fake name and make a new website for just my photography. I shouldn’t let people know that I like to do more than just one thing. I shouldn’t get distracted by doing more than one thing.

But, is this really good advice to follow? Does a wide focus spread across many fields eliminate the possibility of truly mastering any one of them, or does the knowledge gained in one discipline inform the decisions made in another?

I have discovered that the more time I spend doing things that are unrelated to painting, the more my painting improves. Several years ago, I learned that 20 minutes spent practising guitar did more to improve my painting technique than sketching ever did. My guitar playing hasn’t improved in the last decade, but my painting has.

Another example: the white-on-white paintings for my ‘About: Blank’ show back in November 2010 came out of the geometric pieces in the “Take a Picture” The single points of light in Take a Picture gave me the idea to do a series of white-on-white gloss-on-matte half tone paintings. Those failed miserably, but I liked the white on white, so I went back to my squeezing lines of paint technique, and that is what I ended up showing. The connection may not be visible in the final images, but I never would have made that first step in that direction without the electronic art side project I was working on.

Take a Picture: Geometric abstraction —> Urban Landscape from About: Blank 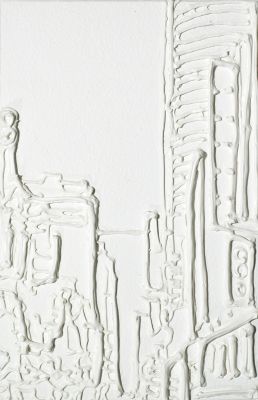 The latest example of one discipline informing another happened during the photo shoot I wrote about in my last entry. While this was a photography project, the process of creating these photographs was very similar to painting, only we were painting with light, rather than pigment.

Photography is very much an art of compromise; deciding what to include, and what to leave out, of what to focus on, and what to blur out. This photo shoot occurred during the night, each exposure lasted a good 30 seconds or so, and we were equipped with multi-coloured LEDs. This meant we had a fair amount of control over what was in the image, what was the prominent feature, how prominent it should be, what colour it will appear, etc.

If I thought one tree deserved to be made into a focal point, I could shine a light on it, or make it a complimentary colour to its surroundings. It was quite a novel experience for me. I’ve never really done photography like this, and my mind was racing the whole time. The experience reminded me of the old painting technique of glazing, adding a very thin layer of transparent paint over a large area to unify areas or push objects back. 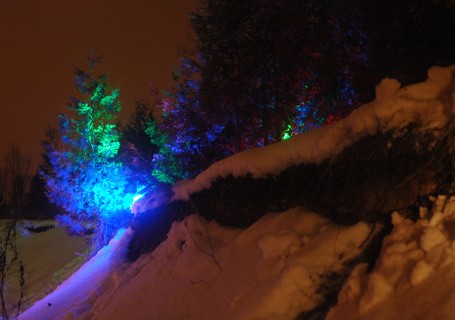 This photo shoot got me thinking about composition and image making in new ways. I’ve got some new ideas for my painting, and I got those ideas from photography. If it wasn’t for my being a jack of several trades, I never would have had those ideas.

Tweet I’ve often heard the expression, “jack of all trades, master of none”. The idea behind this phrase is obvious enough: if I spend my time doing a little bit...

One thought on “Jack of All Trades, Master of None?”